Let's say father where we failed.

At the beginning of July 1995 in Srebrenica happened the worse European massacre after the Second World War, within the conflict of the war of Bosnia, known like The genocide of Srebrenica. Serb troops commanded by General Ratko Mladic consistently tortured, raped and killed systematically more than 8,000 civilians of this population of the former Yugoslavia in a few days, the statements of the witnesses of that barbarism are terrifying. And unfortunately it was not the only place where murders and rapes were perpetrated against the civilian population in that warlike shame, the massacres and rapes took place daily.

For this reason, a series of mobilizations and demonstrations were organized to raise awareness among the population and politicians of the era of the inadmissibility of the tragedy. And in Banyoles we had a large number of refugees from the Bosnian war, so all kinds of events were summoned, and they allowed me to contribute my grain of sand in this regard. 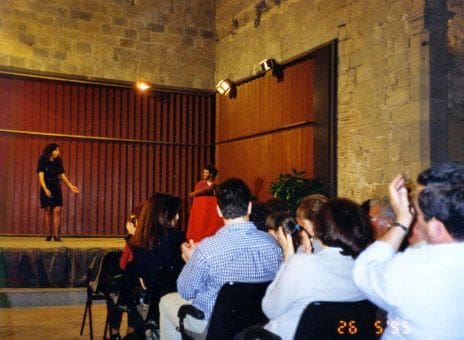 In a concert with Katy Evoghly

Hence this piece is born, in principle for psaltery and voice, and later on I have made all sorts of arrangements.

The moment of the premiere, the evening of September 4 of that fateful 1995, in the main square of Banyoles, the silence was sepulchral.

One of the arrangements I made for this subject was to be incorporated into the record work Glimpses of the year 2001, but later I rejected it. We still use it live a lot with great success.