George Orwell wrote the autobiographical tribute Homage to Catalonia in 1938, just after having been able to escape a certain death in Catalan lands in the midst of the armed conflict of the Spanish Civil War.

Orwell enters Catalonia in December of  1936, and tells us that he arrives in Barcelona with the idea of writing journalistic articles and how he joins the militia of the Revolutionary and Anti-Stalinist Labor Party of the Marxist Unification (POUM) to fight against The Francoist threat.

But the most dramatic thing about Orwell's story is that his escape is provoked by a persecution to death among his comrades on the side, let's say anti-Franco: Communists, anarchists, trade unionists, Republicans ... The political reality of Civil War in Catalonia was more complex than most think.

The struggles for power between republicans and revolutionaries provoked one of our great historical shame: the Acts of May, a bloody confrontation that provoked hundreds of deaths in May of  1937 in the streets of Barcelona between those in favor of the Republic and the revolutionary militiamen. A Civil War within another Civil War!

That is what this musical work is about, Orwell's impotence because of the situation in which he was involuntarily involved; of the pathetic impossibility of the Catalan political forces of the time to make a common front before the invading Francoist troops.

The beginning of defeat. The violence of that time was an evil dust that impregnated everything.

The premiere of the play was made inside the show A look back, as an initial prelude to it, since the whole show focused on the exile of 1939, and Orwell's work serves as a premonition in the final defeat that forced more of half a million people to leave their homes and march to an uncertain future full of difficulties, suffering and death. The show ended with the works Companys president and Memoirs of the exile. 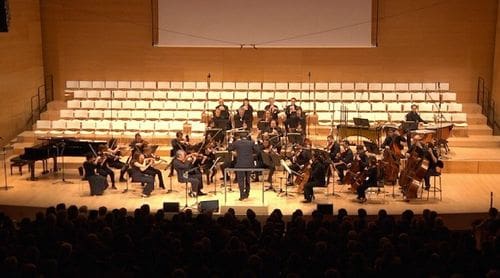