Dream for a good friend.

In 2008, on the occasion of the celebrations of the centenary of the birth of the famous Catalan composer Manel Saderra and Puigferrer, the Fomento de la Sardana of Banyoles wanted to make a particular sardana that called it GLOBAL SARDANA, inviting a group of composers who had won the Prize of composition for cobla that wears its name to create this joint sardana, and I was one of those fortunate ones.

It consisted in creating a new sardana inspired by the most popular work of Manuel Saderra's entire repertoire: the Dream Sardana. With this aim, each of the participating composers was given a part of this GLOBAL SARDANA, and I had to create what is called a short.

The sardana is a traditional Catalan dance that is danced in a circle holding hands by men and women, and is interpreted with a unique instrumental grouping in the world called La Copla, of very particular sonority, created to interpret sardanas in the open air and with unique instruments in the world as is Tenora, a kind of tenor oboe with a very sharp sound. If you want to listen to the sound of this characteristic Catalan instrument in my work, I invite you to listen to: 5 miniatures, The Dreams Dome, Emociona't-e or Water Nymphs, always interpreted by my good friend and great Tenora Jordi Molina.

The Cobla usually consists of eleven instruments, sometimes expandable to 13, all of them wind except the double bass that is string. The same Igor Stravinsky when he came to Barcelona in 1924 on the occasion of the premiere of his works, knew the sound of the Cobla and made all kinds of praise.

Manel is therefore a short sardana inspired by the work Dream that was interpreted in the Plaça Mayor of Banyoles together with the parts created by other authors, thus was born this particular GLOBAL SARDANA. A unique creative conjunction experience.

Manuel Saderra and I met the distant 1992 in Besalú, and we were always united with a deep mutual respect and admiration. He was an endearing and very dear person, a great musician. Whenever we could talk for a while o the musical world, he sayed that I reminded to him when he was young, a compliment to me, and he always encouraged me not to listen much of what the people of my work said. I will always have him in my heart.

I put you next to two audiovisuals in case you want to expand knowledge about La Cobla and La Sardana. One is the interpretation of the original sardana Dream by Manuel Saderra i Puigferrer and the other is a curiosity where you can see me directing the interpretation of the so-called Dream with four couples, since each year for the major festivals of Banyoles they invite a musician to lead these four couples in the Plaça Mayor de Banyoles as a closure. In 2014 I was invited to direct this experiment, and that is what you can see in the other audiovisual. 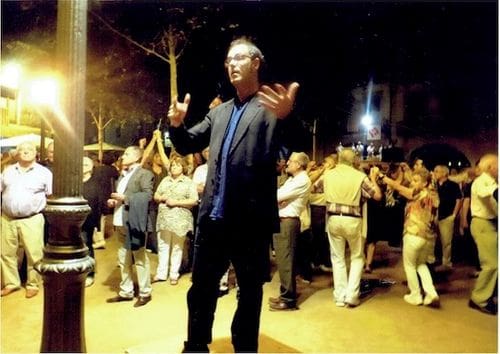 Live interpretation in Plaça Major of Banyoles, on December 21, 2008.
Score in pdf: