Rhythmus means rhythm in Latin, and rhythm means life or movement in any common language. When we speak of rhythm, we speak of anything but death. The rhythm or its absence are the genesis of all musical works. This work carries within itself the will to make it well understood in a blatantly implicit way.

The cobla (traditional Catalan instrumental ensemble) is a surprisingly very ductile instrument with rhythm. Rhythmus also doesn't want to be a pretentious work in this aspect, we wouldn't be honest if we said that the objective of this work is to show all its rhythmic possibilities, but some of them.

In Catalonia, when we want to demonstrate our pagan and ancestral origins, we gather "devils" and set them on fire in the streets of our cities. This is a feast that is also celebrated in a similar way in other regions of the planet. These devils are accompanied by groups of drums that give the party an inseparable and powerful force.

In Rhythmus, there are two traditional Catalan musical ensembles: drums and cobla. Two sister groups but distant in the proper musical context. At Rhythmus we want to start cutting this distance. 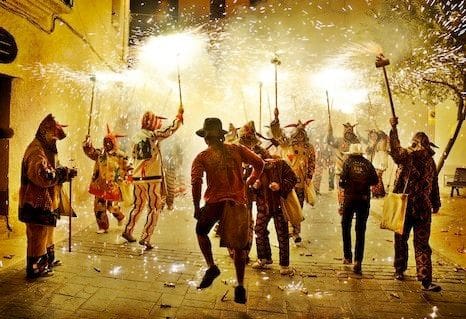 The work is headed and closed by two movements at tutti, to develop at least in some measure the possibilities of these two groups together. The intermediate movements of the work explore the rhythmic possibilities of the different cobla families separately. Finishing the work with a kind of procession to the promised land in a spectacular conclusion "in crescendo".

A tribute to the musical wealth of Catalonia, and a sound discovery of both groups together.

Work presented in the Banyoles-Ceret composition competition in 2004.

Later, in October 2006, I managed to premiere the work, and we had the premiere with creativity in the choreographies of Pau Lleal and the Esbart Dansaire of Fontcoberta, with precious dances created expressly for the occasion, the same protagonists that led to in 2002 the ballet Water Nymphs.

Concert at the sports Center La Draga of Banyoles, on October 23, 2006