The mountains and the stars have seen you return to the light.

During this trip we contact a very special person of the island: Antonio Capote, and we become friends. He tells us a story of resistance, of struggle for freedom in the oral tradition of his people: the story of Tanausú, the warrior who fiercely resisted the subjugation that came from the peninsular armies to conquer the island during the fifteenth century, with kidnappings, rapes and killings. Immediately I felt captivated and identified by these two discoveries: the island of La Palma and the story of Tanausú. 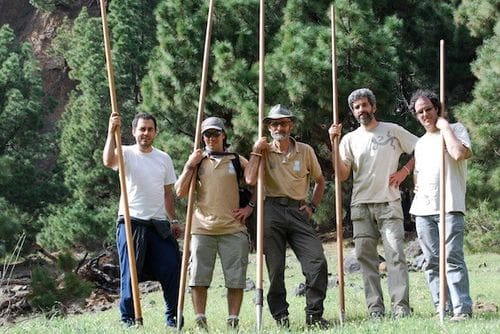 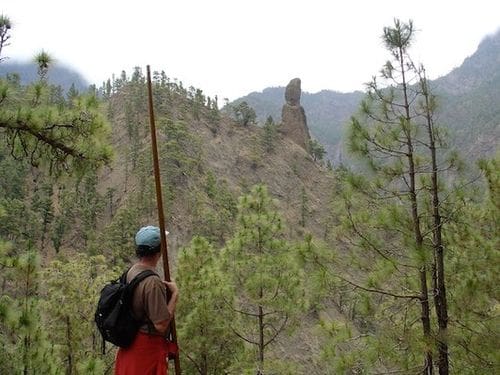 Allá a lo lejos te he visto,
Tu cabello danzaba con el viento.
No hay más mundo que este mundo,
Y ya sé que no es cierto.
Respiro un olor antiguo,
Y me sabe a profundo.
En la raíz te he visto,
Eres mi amparo, mi mundo.
(English translation)
There in the distance I have seen you,
Your hair was dancing with the wind.
There is no world, only this world,
And I already know it it's not true
I breathe an ancient smell,
And it tastes me deeply.
In the origin I have seen you,
You are my refuge, my world.
Nék en·naijám dîndéje,
Ar tef·fîrfered ushéb·bubin·ném dadú.
Uar dá shamadál jadenár amadalá,
Nekes·senéj uar tidet shá.
Nék senfesejí ÿuÿanijuarén,
Jîsejá sig·guáze.
Nék en·naijám dajedér,
Kém danegarin·nú, amadalin·nú.

In interminable calls, Ignacio Reyes told me and instructs me in the sound of this ancestral language, and above all, in its culture, values and beliefs. It was an exciting creative process.

In addition I wanted to live in person what would be the life of those original people of the island. I surrounded myself with the best connoisseurs of the landscape of La Palma, and I made with them many excursions to get to know their best kept secrets. Among many of these unforgettable experiences, I stayed alone in the Punta de los Roques refuge, at an altitude of 2,000 meters, on an incredible night under a huge dome of stars, and above a sea of clouds, and I made a risky descent into the Caldera de Taburiente with its traditional Canarian Stick.

And this is how on April 21st of 2009 this work make it's premiere audition in this beautiful city in Central Europe, Bratislava, 60 kilometers from Vienna, a city where composers like Mozart, Beethoven, Haydn, Bartók and Liszt had given his concerts. In this beautiful city Tanausú was premiered with great success.

Unfortunately the Cabildo of La Palma and its financial managers of the recording still owe us money for the work done, and the work has not managed to premiere anywhere else, not even in the Canary archipelago. It is true that because of the large number of musicians who ask for the work between orchestra and choirs, taking it to the stage is a high cost, but I do not lose hope of seeing someday playing it somewhere new on the planet. Hopefully.

The memory of the enthusiasm of the orchestra and especially of the choirs participating in that recording / premiere in Bratislava is so strong that I will never forget it.

Work included in the show Tanausú (2009)

And this is the recording of the work that we carried out during the first months of 2009 in the city of Bratislava: