All night I spun over the lake of Banyoles.

Original version of the work, which after I made a version for a smaller musical group.

After winning the first prize in the Songwriting Contest for symphonic cobla Prize Manel Saderra of Banyoles in 1998 with the work Mediterranean, a contest convoked every four years, I composed this other work for four female voices and cobla, about a poem of Mossèn Cinto Verdaguer, which was proposed in the contest, with the purpose of participating again in this prestigious cobla contest.

The poem of Verdaguer, which also gives name to the musical work, enthralled me since the first moment I had it in my hands. It is a beautiful and full of lyricism poem, that helped me create a mysterious and fogged atmospere, but at the same time sensual and tender. How big is Verdaguer! I don't have use any more his poems for works, but it's a pending issue. 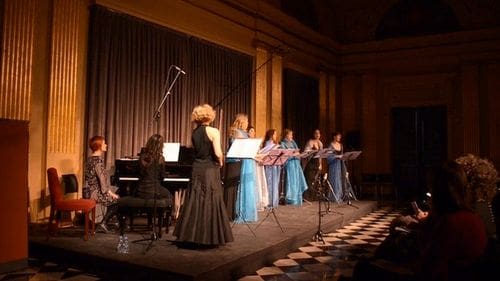 I remember to enjoy a lot with the creation of the music that surrounds the poem. But the judges didn't choose it as a winner in 2002, so that this music stood silently in the drawer withput anyone knowing how it sounds, except me, for some years.

Until a chance encounter with soprano Maite Mer in Girona in 2010, made to get back the parked score and I made a new instrumentation of the work, as Maite told me she had a female cobla who could premiere it. Fot that end, aside of re-instrument the work for cobla, I made an other easier arrangement for clarinet or tenora and piano and four solist voices that name the poem. But sadly neither was premiered.

At the end, in 2012, the same Maite Mer proposed me to make a show completely with my own work called Water Nymphs The show, and the yes, I recovered the work, this time adapting the part of clarinet/tenora for violin, and in this form was premiered the work on February 10, 2013 at the Municipal Theater of Girona.

During the time the show was lead by Maite Mer was moved arround catalan land, the final piece were always my "Gojes", and it was for me a pleasure to recover this work from oblivion, which I have a special esteem. 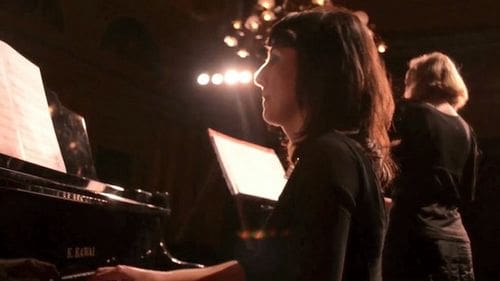 All night I spun
near the lake of Banyoles,
When singing from the nightingale,
when sing of goges.
My hair was golden,
of silver the sharp one,
the neighboring forests
They've taken me by the dawn.

To unleash my thread
I have beautiful scrubbers,
the mountains of Begur,
those of Begur and Armen-Roda,
the Puigneulós mountain ranges,
those of the Món and Rocacorba.
The Empordà plain,
I've never had a better crown,
Lightning rays crown
braided with lilies and roses;
it looked like a royal pagon
opening up the blooming wheel.
My hair was golden,
of silver the sharp one,
the neighboring forests
They've taken me by the dawn.

As the thread was golden,
the skein was blond,
beautiful hair of the sun
foggy in fog
From the Estunes to the bottom
we wove four cottages,
Their loom is crystal,
from vori the shuttle.
You see the veil that they have woven
All express for a wedding.
My hair was golden,
of silver the sharp one,
the neighboring forests
They've taken me by the dawn.
Work included for the show Water Nymphs (The show) (2013)
La Goja de Banyoles (version for violin, piano and four female voices) (10'54):

Concert at the Municipal Theater of Girona on February 10, 2013
from Cd Water Nymphs (The show) (2013)
Score in pdf (vesión for violin, piano and four female voices): 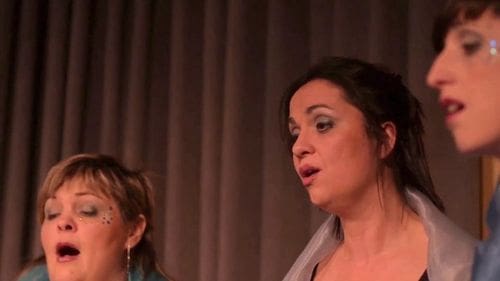