Abstract arranged for female choir of a part of the work Water memory, the part I call "Your eyes", a love letter.

This means in this town, every 3rd of March is celebrated for decades without any kind of complex its independence, and awards are given each year to different entities or persons, who during that year did something important for the town, and celebrate an award ceremony in the Municipal Theater.

In 2003 is celebrated 20 years of independence os Salt, and form the Water Museum and the City Hall of Salt was born this "Water Memory", a travel by the history of Salt using water as a link 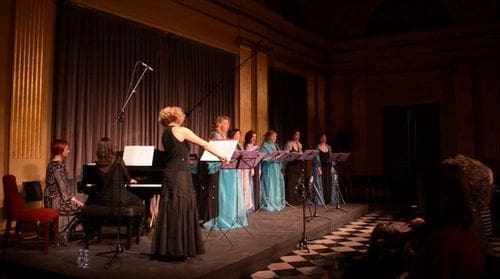 I created the arrangement specifically  to use it in the show Water nymphs in 2013.

-Your eyes:
You are as beautiful as a doll
and your skin is out of porcelain.
Your eyes are as a mystery,
and everytime I see them I tremble.
Work included in the shows:
-Your eyes (version for female choir, violin and piano, show Water nymphs) (3'32):
Concert at the Municipal Theater of Girona on February 10, 2013.
Score in pdf (version for female choir, violin and piano):