Small work created expressly to be interpreted during Easter, in the traditional procession of the Virgin of the Dolores, in the town of Besalú (Girona). Sister of my later work Estaferms.

Besalú maintained in its tradition the non-incorporation of women in the groupings of the procession of the Virgin of the Dolores, but the year of the creation of the Walk of Troubadour, 1992, was called to the transgression, since they were the same directors and members of the Estaferms, who after no little controversy commissioned me to create a group of 6 women flautists. To that end I thought of using a sufficiently sharp instrument to make it feel in the streets of Besalú, where the procession takes place: the Whistle, a very popular instrument in Ireland.

The Estaferms are the grouping of the procession that symbolize the devotion to the virgin by the humble people of the town, so I have always been very proud that for some years I was part of the drums of Estaferms, and I also feel very proud to have helped them to create this group of flautist women who accompany them and the two works composed for that purpose that still ring through its streets during Easter. 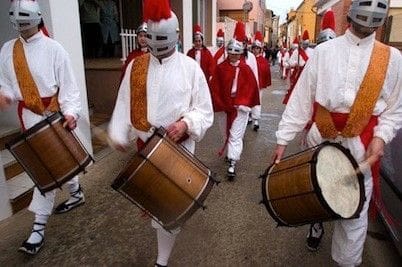 Tradition and transgression, this are these two works. Its musical style, markedly medieval, gives the ancestral touch to the proposal, as the streets and traditions of Besalú keep the flame alive of the twelfth century.